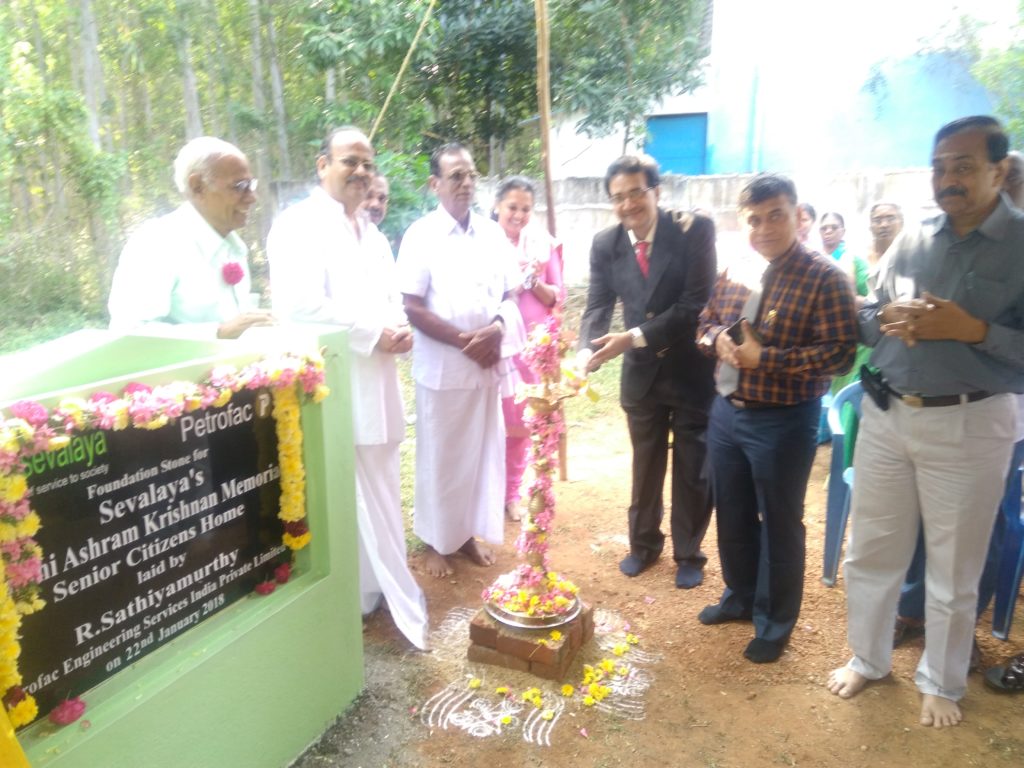 Sevalaya has taken another major initiative in the services to the destitute elders. Sevalaya’s Advisory Board Member Mr. K. Muthuramakrishnan, has donated a ground in Thalavaipalam , T.S. Nagar, Nagapattinam Road, for construction of an old age home building, in fond memory of his father.. The Home has been named after his father, “Sevalaya’s Gandhi Ashram Krishnan Memorial Senior Citizens Home” The foundation stone laying function took place this morning in the land.. Mr. V. Muralidharan, Founder and Managing Trustee, Sevalaya presided over the function.

We are delighted to report that M/s. Petrofac, has come forward to donate for constructing the proposed building. Mr. R. Sathiamoorthy, AGM, opened the plaque and lit lamp. Declaring open he said that their organisation, M/s.Petrofac is delighted to participate in this great initiative of caring elders. Further he said that their organisation will continue to extend its helping hand to good projects also under their CSR (Corporate Social Responsibility) initiative, and would like to participate in all Sevalaya’s endeavors.” he said.

Mr. V. Muralidharan, in his note made a special mention, “the organsiation with its HO in Sharjah, has come forward to help the greater cause of constructing a building for destitute Senior Citizens., in Tanjore. It is a matter of great delight, he said, He further said, that the donor Mr. Muthuramakrishnan’s father Gandhi Ashram Krishnan was an ardent freedom fighter. He served the national cause with Rajaji. He was managing Tiruchengode Gandhi Ashram for a long time. Twice he went to jail while participating in India’s freedom movement. It is a matter of great privilege to open a Home named after such a great martyr and in his fond memory., he said amid loud applause from the audience.

Mr. Kingston, and Mr. Prasanna of Sevalaya participated in the function.

Earlier Mr. K. Muthuramakrishnan, welcomed all. Mr. A. Maheswaran, Trustee, Sevalaya, gave mementos to the guests. Mrs. Radha Srinivasan, proposed vote of thanks. In the end National Anthem was sung by all.