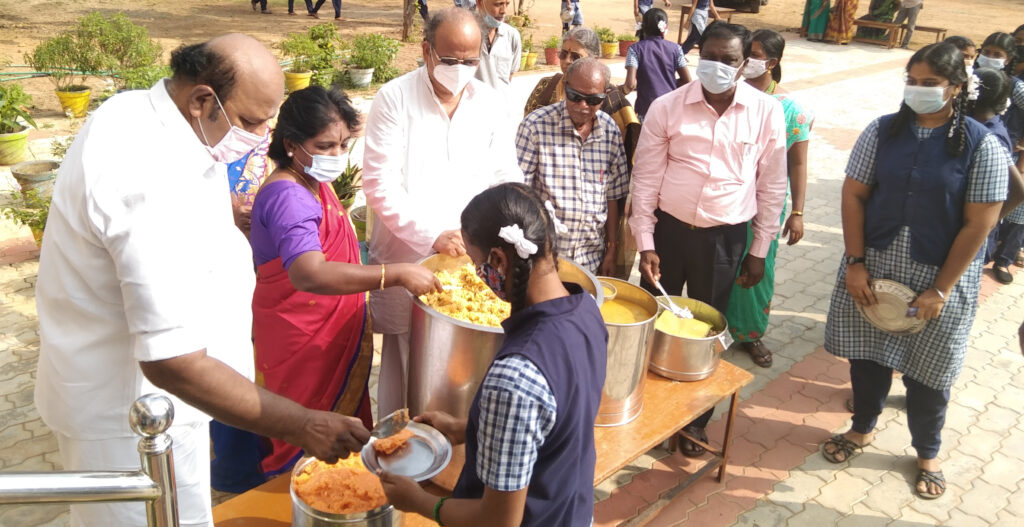 Nearly 2000 children are studying in the Government girls’ Higher Secondary School and Panchayat Union Middle school operating in the palace complex of Thanjavur. With board exams round the corner, special classes have been started for these children. These children have to reach school earlier and often come without eating breakfast. This may lead to difficulties in concentration and learning ability. Keeping this in mind Petrofac has come forward to sponsor a healthy breakfast for these children till the end of this academic year. Sevalaya which has been implementing this programme since the past few years will continue to do so this year too.

The programme was inaugurated today by Mr T K G Neelamegam, MLA Thanjavur. Speaking on the occasion, the honourable member of the Legislative Assembly lauded the efforts taken to combat hunger which is a deadly disease. The girls studying in Government schools are proving their mettle in several areas. Food is a basic requirement for these children and Sevalaya has been addressing this need since the past few years. It has resulted in improving the pass percentage and academic performance of students of 5 government schools. He also praised the free education given to nearly 2500 children in Sevalaya’s school at Kasuva.

Ms Punitha Ganesan (Secretary, Bharath college of Education), a special guest at this occasion said that she would surely take part in Sevalaya’s service activities. She said this programme had taken her down memory lane to her own childhood days, as she too was educated in a Government school. She asked the assembled children to make the best use of the facilities given to them and do well in life. The headmistresses and teachers of the schools also participated in the programme.