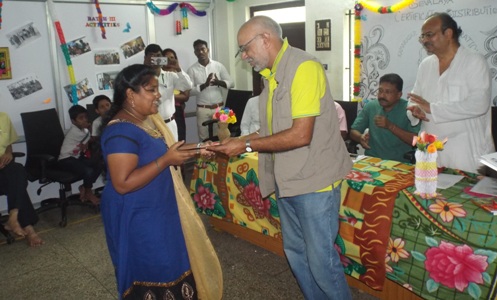 The Chief Guest T.Saju, Assistant Editor, Times of India  recalled the contributions of Kamaraj to the nation in general and as Chief Minister of Tamilnadu, in particular. He particularly mentioned that the Late Chief Minister’s decision to provide mid-day meals to the students was not only to feed the poor children, but also to ensure larger enrolment and regular attendance in schools. He said that eradication of illiteracy and opening up of over 6000 schools were the hallmarks of Kamaraj era.

Earlier various competitions like essay writing, oratorical and quiz competitions based on the life of the great leader were conducted for the students. Prizes were distributed to the winners of these competitions on the occasion by the Chief Guest T Saju.

Certificates were also distributed on the occasion to the 22 students who had successfully completed the E Publishing and Tally Courses conducted at the College.

G. Subramanian, Director, Jouve India Ltd., who graced the occasion with his presence, distributed the certificates and  issued appointment orders to all the 7 students who had completed  E publishing course.