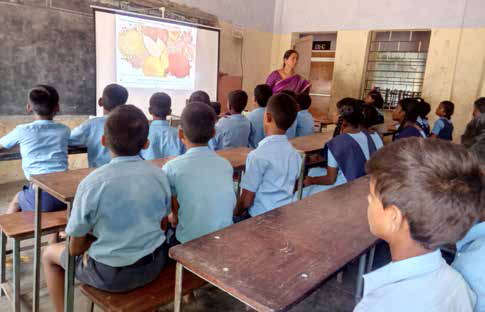 Page Pierre, a longstanding donor, during his visit to the campus on 9th April 2018, inaugurated a slew of projects including six ‘smart’ class rooms, Go digital and staff quarters, sponsored the by Page Pierre foundation, during the course of the year.

While visiting the six Smart classrooms, he was impressed by the usage of technology where the students from Primary to Std IX, learn their subjects through an audio visual format. Large screens display the content for all subjects that are pre-loaded in data storage devices. The teachers are trained to supplement these classes to reinforce the fundamentals to the students. He also visited the ‘Skype’ classroom where two workstations are dedicated to volunteers who call in from all over the world to take classes for the students.

Sevalaya campus is now completely networked by Fibre-optic cabling and an EPABX system which has helped in easing communication bottlenecks between far flung units within the campus, as well as securing the campus via CCTVs. Go-Digital, a flagship software project to synergize the functioning of all the units within Sevalaya, specifically School management, campus management, accounts and admin, HR, and donor and donation management, was part of the sponsorship. The functioning of the software was explained to him with live data during his visit, which was well received. This has streamlined the functioning of all departments, enabled “anytime anywhere” access of data, and has reduced the turnaround time for most of the mundane administrative work.