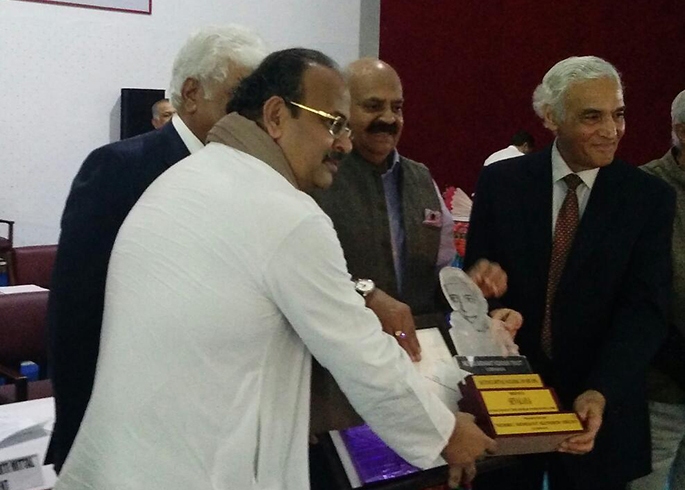 Sevalaya was the recipient of Sat Paul Mittal National Award 2016 for outstanding service to Humanity.  V Muralidharan, Founder and Managing Trustee of Sevalaya received the Award at the hands of His Excellency the Governor of Punjab, V P Singh Badnore on 11 November 2016 in the presence of Rajesh Bharathi Mittal, President of Nehru Sidhant Kender Trust and Bipin Gupta, General Secretary of the Trust.

The award is instituted by Nehru Sidhant Kender Trust and carries a cash award of ` 100000/ and a citation. The Trust was founded by the late Congress MP Sat Paul Mittal, Winner of United Nation’s Peace Award, in 1983 to propagate the ideologies of Pandit Jawaharlal Nehru.  The Trust presents these awards for outstanding service to humanity, on the occasion of Jawaharlal Nehru’s Birth Anniversary every year.

This year Sevalaya has won this Prestigious Award  for reaching out to more than 2 lakh beneficiaries for  the past 28 years, by providing free education, health care and marching on still with a vision to create a free university for the rural poor students, which is in line with the ideology of Sat Paul Mittal.

In his acceptance speech, V Muralidharan dedicated the Award to Mahatma Gandhi, Mahakavi Bharathiyar and Swami Vivekananda who are the main source of inspiration for Sevalaya and to all the dedicated staff of Sevalaya and the rural students and senior citizens – the beneficiaries from the underprivileged section of the society. Thanking the Nehru Sidhant Kender Trust, he added “I had to travel the entire length of the country to receive this award. The Trust functioning in North India has selected our institution from down South and this proves that we are united as a nation. I don’t know your language nor have I ever been to this part of India but this National Award has broken all the barriers and united us”.