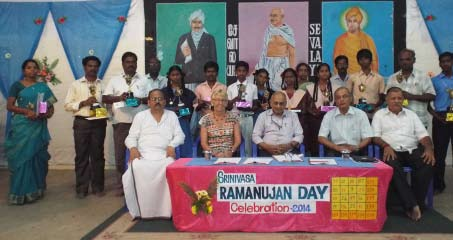 Mohan, during his speech stressed the need to be proficient in Mathematics, since this subject forms the basis for all the higher studies including economics.He advised the children to study well making use of the opportunities provided in Sevalaya, come up in life through quality education and go in for various research. He narrated an anecdote wherein Ramanujan gave a new hypothesis to the number 1729.

This number was taken from a car’s registration number. Instantly within a few seconds Ramanujan said that this number was the smallest number which had the combination of two cubes. “Such was his genius!” Mohan pointed out.The other dignitary on the stage was N.Balasubramanian popularly known as Bharathi Balu, who made power point presentations on the life history of the great genius and solved some interesting Maths problems to highlight how the subject can be learnt and understood easily.

Every year Sevalaya’s Mahakavi Bharathiar School celebrates Ramanujan Day. During the month of November 2014, students of Std VI to XII from schools in Thiruvallur and Chennai were invited to write an examination. 99 children from 10 schools participated in this competition and 11 children were selected for the prizes. The prizes were distributed to the children during the Ramanujan Day celebrations. Irene Nicoll, volunteer from Scotland also distributed medals to the prize winners.