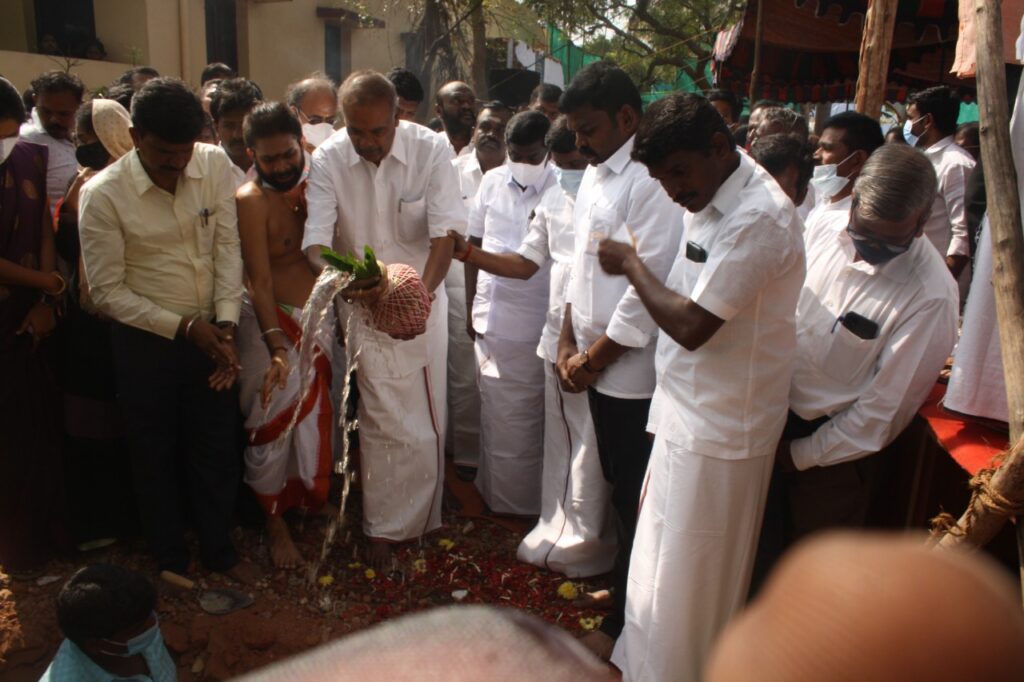 The bhoomi pooja and foundation stone laying ceremony for the Chellammal Bharathi centre at Kadayam was held in the presence of the Honourable Speaker of the Tamil Nadu Legislative Assembly, M Appavu. Speaking on the occasion, the honourable Chief Guest, recollected briefly the life of the great poet, his love for the Tamil language, his services for the Tamil society and contributions for India’s freedom struggle. He suggested  that Sevalaya should approach Honourable Chief Minister M K Stalin and invite him to unveil the statue of Chellammal – Bharathi. He also assured that the Government would offer full support to Sevalaya for this noble initiative.

Janani DRO, Tenkasi,  I Paranthaman MLA, (Hon. Member of the Legislative Assembly, Egmore),  E Raja ( Hon. Member of the legislative assembly, Sankarankoil)  P Sivapadmanathan (South District Secretary, Tenkasi) were the  special guests on this occasion. All of them in their speeches lauded the efforts taken by Sevalaya to popularize and spread Bharathi’s greatness to the whole world, which had been denied to him during his lifetime. Many wellwishers, Bharathi lovers and members of public participated in the function.

Rajkumar Bharathi, the great grandson of Mahakavi Bharathiyar, Isaikkavi Ramanan (Poet, writer) joined the program online and extended their felicitations.  Ramanan said that in those days when Bharathi stood helpless after his release from Cuddalore  prison, his brother in law Appadurai (Chellammal’s brother), had come forward to extend a helping hand and invited the family to stay with him in Kadayam.  Similarly now Appavu, the Honourable Speaker has supported Sevalaya in its efforts to install  Chellammal Bharathi statue in Kadayam.

Statues have been installed and memorials have been established for the great poet Bharathi in Ettayapuram, Pondicherry, Chennai, all places associated with his life. Even in Varanasi, where he spent few years as a student, a statue of the poet  has been installed in his memory.

It is very unfortunate that there are no traces of Bharathi in Kadayam where he has spent two years and penned many immortal poems. In an effort to perpetuate the memory of Bharathi in Kadayam, Sevalaya has planned to set up a vibrant centre here in place of the old dilapidated library. A new library with modern amenities, with a a life size statue of Bharathi and Chellammal at the centre, and museum in the theme of Bharathi in Kadayam, and an auditorium where regular programmes, lectures, seminars on Bharathi’s works is being planned.

The function ended with the singing of the National Anthem.