BNY Mellon-Sevalaya team up for rural health and nursing lab 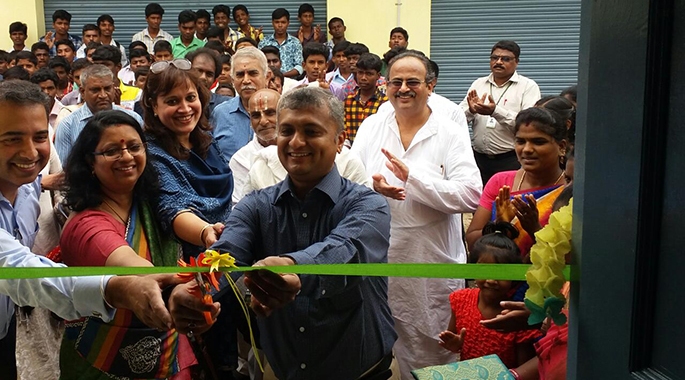 Mr. Dinesh Deo, CEO, BNY Mellon International Operations India Pvt Ltd handed over the keys and flagged off the Mobile Medical Van and inaugurated the nursing lab at a function at the Kasuva Campus of Sevalaya, a registered charity on 30 June 2016.

The fully equipped nursing lab is a boon to the village youth who have joined in the free nursing assistant course at Sevalaya‘s Mahakavi Bharathiyar Community College and will help in practical learning.

The foundation for Sevalaya is the inspiration of three great leaders viz., Mahatma Gandhi, Mahakavi Bharathiyar and Swami Vivekananda. All the activities are named after these Trinities or people closely associated with them.

It is very apt that the mobile medical van has been named after Kuvalai Kannan, a disciple, an ardent devotee and security of Bharathi. When Bharathi was thrown by the elephant and lying between its feet at Sri Parthasarathy Temple at Triplicane, the people around watched helplessly and were scared to go near him and rescue him. It was Kuvalai Kannan who rushed to Bharathi’s aid, picked him up and took him to the hospital. To honour Kuvalai Kannan’s memory, the mobile medical van has been named after him. “This van too, will reach out to the people in the villages and provide medical assistance to them in times of need “mentioned V Muralidharan, Founder of Sevalaya.

Sevalaya undertook efforts to trace the descendants of Kuvalai Kannan and found out that they still lived in Triplicane. It was an emotional moment when Kuvalai T M Srinivasachari, Kuvalai Kannan’s brother’s grandson, himself an octogenarian and his brother named after the legendary Kuvalai Kannan graced the occasion by their presence.

“It is on occasions like these I feel very proud to be a part of BNY Mellon” said the Chief Guest Dinesh Deo, “as the organization is committed to contribute to social causes.”Recollecting his meeting a rural girl in Pune last week, who has designed a water dispenser for her school and who aims to be a fashion designer and Vijayaraghavan, a Sevalaya student now, who aspires to become an IAS officer he added, “These children are the future of India and we are very happy to play a part in helping them realize their dreams.”