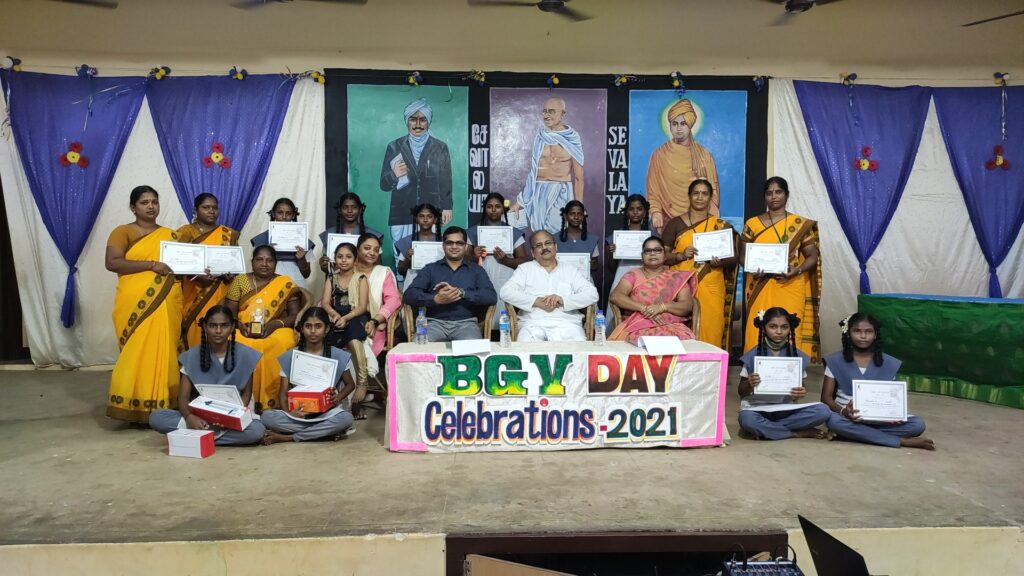 At the celebrations this year at Kasuva,Sevalaya’s founder & Managing Trustee V Muralidharan welcomed the special guest and spoke about the significance of this date September 11th in the lives of Sevalaya’s Trinity – Bharathi, Gandhi, and Vivekananda. It was on this day that Bharathi attained immortality, Gandhiji coined the term Satyagraha for his novel nonviolent struggle and Swami Vivekananda addressed the Parliament of Religions in Chicago.

In his address , the Chief Guest explained that he was not participating as a special guest, but as an ambassador to inform his company about Sevalaya’s activities .He then he asked the students to identify what they wanted to be and then strive toward it implementing the principles of BGV in their everyday lives. He pointed out that a small seed of good thought had grown into a large tree called Sevalaya .He expressed his amazement on seeing this fruition of the founder’s vision and proclaimed Muralidharan as the Agent of Change. He said that in his company they used the term BGV (Background verification) to select employees but here it meant a certain discipline and a moral education that could produce well cultured, patriotic ,disciplined students with sound moral values. He promised to contribute to the fulfilment of Sevalaya’s dreams
Earlier students 560 students from 28 districts had participat in speech, poetry recitation , quiz, and painting contests . The names of the 42 prize winners were announced by Magarika, Coordinator, Value Education, Sevalaya and the special guest presented prizes to the students.

Prizes were also awarded to the students who had won the quiz competition conducted by the National Gandhi Museum and Library and the teachers who had encouraged them. A memento was also presented to Sevalaya School.

Gifts were presented to Sevalaya employees celebrating their birthdays this month.
Anu Priya, Head Quality and Volunteer, Sevalaya gave a vote of thanks and the event concluded with the National Anthem.