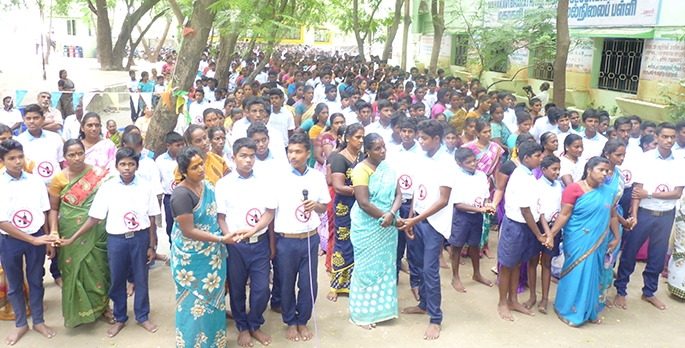 500 students of Sevalaya’s Mahakavi Bharathiyar Higher secondary School and Community College, held their mothers hands an took a solemn pledge that they will never drink alcohol in their life at the Putli Bai Day organized by Sevalaya on 5th August  2016 at its service centre located at Kasuva village in Thiruvallur District.

In the month of August 1888, Mahatma Gandhi got permission from his mother Putli Bai to go to England for higher studies, only after he promised her that he would not touch wine, women and meat and he strictly adhered to these promises in the face of many temptations while he was abroad.

G Ram Mohan, Former Railway Safety Commissioner, a staunch Gandhian and a long time well wisher and associate of Sevalaya had written to Prime Minister Narendra Modi last year, about organizing “Putli Bai Day “every year in the month of August, where the students will make a promise to their mothers that they will not drink alcohol as a measure to combat the problem of alcoholism which destroys the lives and families of thousands of poor, especially in the rural areas.

Ram Mohan had shared his suggestion to the Prime Minister with Muralidharan, Managing trustee of Sevalaya.   Supported by Ram Mohan, Sevalaya has started organizing Putli Bai Day in the school since last year.

K R A Narasiah, a prolific writer and Dr S Swaminathan, Retd Professor of IIT and a Heritage enthusiast were the special guests on the occasion this year. The oath, in Tamil was administered by G Ram Mohan.

It was a very emotional moment for the mothers present, when their teenage sons held their hands and promised that they would never drink alcohol. All the students were wearing T Shirts carrying the message “I Promise that I will never drink Alcohol” presented by G Ram Mohan.

Prof Swaminathan in his address said during his times people who were drunk used to feel guilty and will remain hidden but times have changed now. He declared that this initiative by Sevalaya assumes significance in the condition of the present day society and is highly laudable.

Writer Narasiah declared that a silent revolution has taken place today and exhorted the students to take the promise made to their mothers very seriously and adhere to it strictly.

Students of Sevalaya presented a cultural programme based on the life of Mahatma Gandhi. Sweets and Savouries were distributed to the mothers at the end of the function.