An evening of mellifluous Bharathiyar songs by Dr Nithyashree for Sevalaya 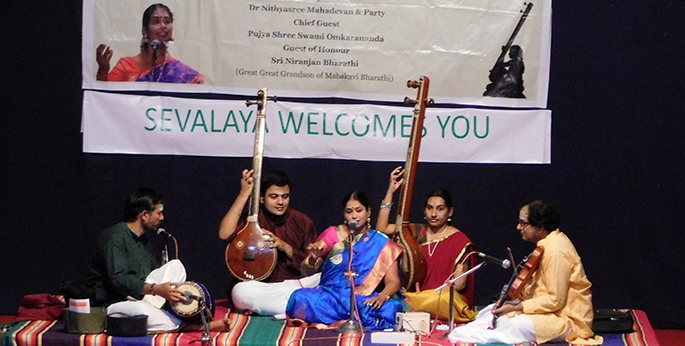 Narada Gana Sabha was the venue of divine Bharathiyar songs titled ‘Jothi Migu Nava Kavithai’ on 20th September 2016. The songs were rendered with grace and aplomb, by Dr. Nityashree Mahadevan. The evening started with a discourse by the chief guest Swami Omkarananda who touched upon the divinity and power of Bharathiyar songs. As guest of honour, Niranjan

Bharathi the great great grandson of Subramaniya Bharathiyar, said he was happy that Sevalaya was founded on the principles of the great poet and that his songs carry the passion after so many years. The audience was in raptures when Dr. Nithyashree sang some of Bharathiyars famous songs ‘Parashakthi’, ‘Kaakkai Siraginile nandalala’, ‘Vettri ettu thikkum’. One could see many people, especially the old timers; hum the songs along with Dr. Nithyashree. Such was the power of the lyrics that it resonates to this day.

As a kind gesture, Dr. Nithyashree Mahadevan and the accompanying artistes rendered the programme totally free of cost, to benefit Sevalaya.