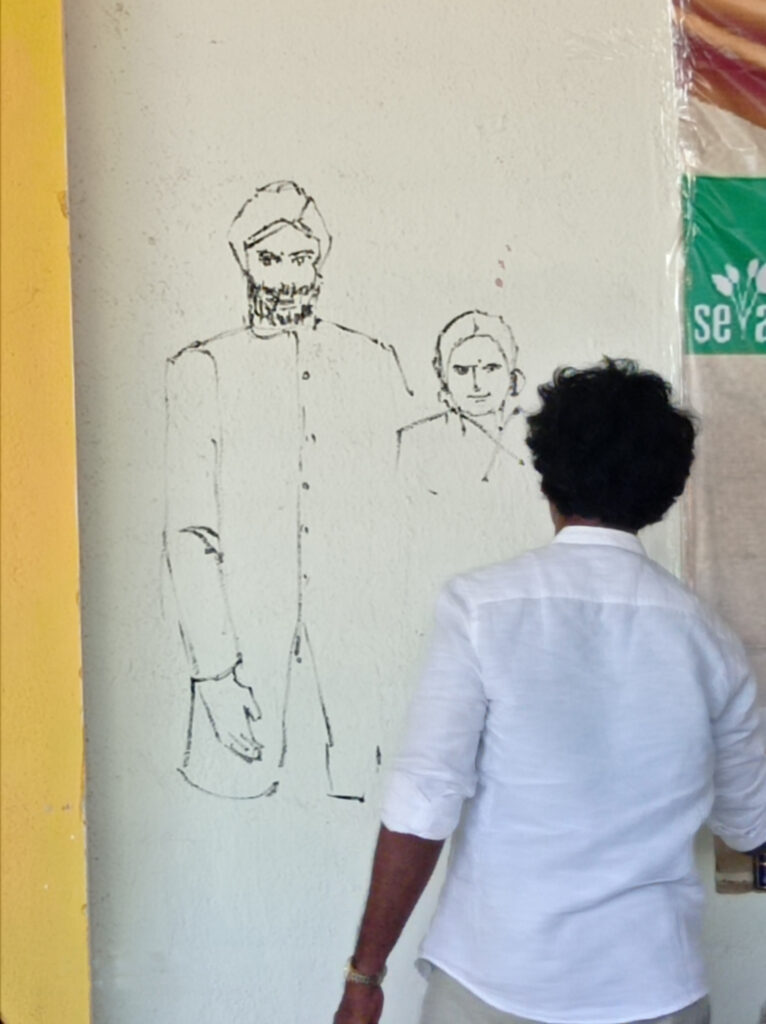 The inaugural function of the project to portray historic significance of Kadayam in Bharathi’s life, through paintings in the walls of the Kizhakadayam Railway station was held on 11th September 2022.

Kadayam is the birthplace of Chellamma, the poet’s wife. It was in this station, Bharathi landed with his wife and child after being released from Cuddalore Jail, when he returned to British India from Puducherry. Having no place to go, Bharathi accepted his brother in law’s offer  to provide shelter to the family in his  house.

Bharathi spent two years in Kadayam. A man for ahead of his times, he faced the wrath of the then traditional society, and was even excommunicated. It was in this town many of his immortal poems were composed.

To perpetuate the memory of this great poet and his life in this town, Sevalaya is collaborating with the Indian Railways to beautify the Kilakadayam railway station with paintings depicting the life of Bharathi and Chellamma.

Around 1,500 Sq feet of wall space will be visually treated by artist Mari Anand. A corporate partner will have exclusive wall space where it’s employees can pay their pictorial tribute to the poet and his wife. School children from Kadayam will also be given wall space and guidance to add their art.

Krishna Jagannathan , spoke about  the greatness of  Bharathi’s poems, of our Motherland and its heritage.   He lauded the services of Sevalaya for the underprivileged.

The railway officials offered felicitations for the efforts of Sevalaya and offered support for this initiative.

Artist  Mari Anand quickly did a line drawing of the illustrious couple, in the station wall, and launched the Project.

Sevalaya Murali, in his welcome address explained the activities of the organisation in the field of Education, Health and Rural Development for the past 34 years.” It was a line from the powerful poem of Bharathi, which I happened to read when I was a small boy of 11 years that was the inspiration for Sevalaya. “ he mentioned.

A A Kingston, VP, Operations, Sevalaya proposed Vote of Thanks.

The function came to a close with the singing of the National Anthem.