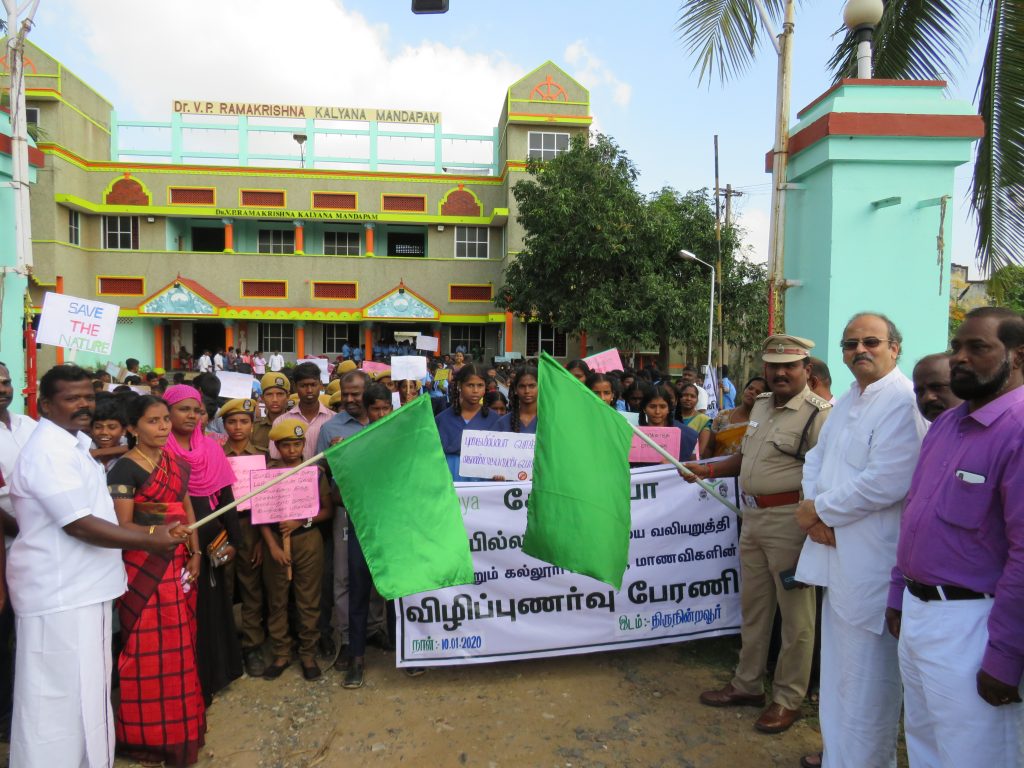 Traditionally during Bhogi, the first day of the Pongal festival, houses are cleaned up and all unwanted things accumulated over the year are burnt. Broken Plastics, old rubber tyres are also burnt and the fumes pollute the air causing a serious health hazard. For the past 15 years, every year Sevalaya carries out a rally, to create awareness about the health hazards of this practice.

The Smoke-Free Concept is to have smoke-free, clean and eco-friendly environment to celebrate the true spirit of the festival. 1000+ students participated in this year’s rally on 10th January 2020, Chief Guest M Venkatesan, Asst. Commissioner of Police Pattabiram range flagged off the rally along with S.Jeru Jones Priyadarshinin, President Nathamedu Panchayat. The rally which started from Dr V P Ramakrishna Kalyana Mandapam in Thiruninravur went through the thickly populated streets of Thiruninravur and culminated at Shanmuga hall near Kakshmi theatre Thiruninravur.v students from Sevalaya’s Mahakavi Bharathiyar School, Dasar High School, Amudha Matriculation school, Government High School, Pakkam and Government Higher Secondary School, Thiruninravur, participated in the rally, holding placards with slogans on the evils of burning waste and plastic and the need to protect the environment. Students march through the streets carrying placards containing slogans on the dangers of burning plastics and rubber and the urgent need to protect the environment, shouting slogans to safeguard the environment and beating drums to catch the attention of the public. Handbills carrying this message were handed to the public by the students

Speaking to the students st the meeting after the rally, Arulraj , Superindent of Police Avadi and Priyadarshinin , Panchayat President said that awareness on environmental issues is effective when they involve students.

Refreshments were served to the students who participated in the rally and prizes given to students for best slogans and the groups which participated most actively.,