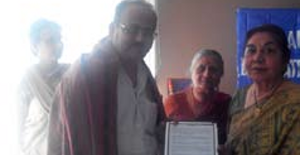 On the occasion of Laskhmi Menon’s 20th death anniversary, Sevalaya was recognized for the exemplary service it has done to the cause of girl Child education. Sevalaya was selected for the “Lakshmi Menon memorial award” for the year 2014. V. Muralidharan, founder and managing trustee of Sevalaya received the award from the Chief Guest Veena Sirohi in the presence of the chairperson of All India Women’s Conference (AIWC), Dr. Aparna Basu and President of AIWC, Veena Kohli, Secretary General of AIWC, Asha Gambir and Vice president of AIWC Janaki Rajaram. The function was held in the All India women’s conference auditorium in New Delhi, on 4th December 2014.