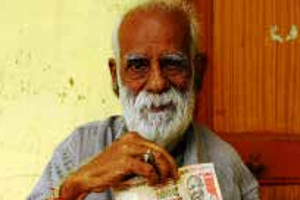 To talk to Gajendran is to realise the essential sameness of human life.

Gajendran’s life story of 81 years has its share of achievements and proud moments, of deceit and grief, but he narrates it all with the objectivity of a contented person, almost as if it is the subject of some third party. Gajendran was born in 1934, the fifth of nine children.

His father was a lowly paid employee of the Corporation ‘s health department. So, at the age of nine, Gajendran found himself a job – mostly sweeping and some assistance in sales, at Premier Textiles opposite Rippon Building. His monthly salary was Rs 2.

One day, while sweeping before the shop opened for business, he saw a five rupee note lying on the floor. He promptly returned it to the shop owner. This happened a few times.

One day, he saw a hundred rupee note. Then he knew : he was being tested for his honesty. So when handing over the big note to the owner, young Gajendran told him: “ Sir, please don’t tempt and make me a thief. “ The owner was very happy that Gajendran passed his honesty test.

Slowly Gajendran’s salary grew in proportion to his owner’s growing trust in him, and reached RS 120. But supporting a family required more. So he joined another textile show room – Rattan Bazaar in Flower Bazaar) as a salesman.

There he got to serve many famous people including former Chief minister C N Anna Durai and K Kamaraj as also then stars of the celluloid, Padmini and Jayalalitha. While recounting those proud moments, Gajendran takes out ever so slowly, a fading album from an old Saravana Bhavan plastic cover, to show fading black and white photos.

They show a handsome Gajendran in floral silk shirts, sporting gold-rimmed glasses. and spreading clothes with a flourish, to entice the VIP customers. It fell on him to vist their homes to deliver the clothes.

Gajendran got his opportunity to meet the then Chief Minister MGR in connection with a function to honour script writer N S Krishnan on his passing away in 1957. From then on, Gajendran used to visit MGR’s Royapettah house every month, to deliver textile materials.

MGR was impressed by the young man. So much so that, shot at by M R Radha, when he was hospitalized in 1967, Gajendran was selected as a trusted aide to do night duty for 15 days in Royapettah Government Hospital.

After he recovered, MGR presented Gajendran with thousand rupees. “ I got them in hundred rupee notes. But I knew friends will ask and I could not have denied them. So I changed them into a thousand rupee note in 1970”, explains Gajendran, proudly displaying it like a trophy.

Gajendran got married around that time. The couple was childless. He lost his wife in 2000 and soon thereafter he reired from his job. Here on, the story turns even more sour.

Gajendran narrates with controlled emotion how he lost a plot of land he bought with his life savings, cheated and driven out by his nephews, how he found himself a liability in the house of his obliging sister and how he joined Sevalaya in 2014.

He smiles through his white beard when he recounts his joy when Sevalaya children fuss around him, calling him “Grandpa, Grandpa”. He is grateful to the Sevalaya management for the peace of mind he has regained – and for the satisfaction of helping bed-ridden residents.

It is three months since he got his monthly pension of Rs 1,000. Yet there is no rancor. Life has taught him to take with equanimity the sweet and the sour it offers.