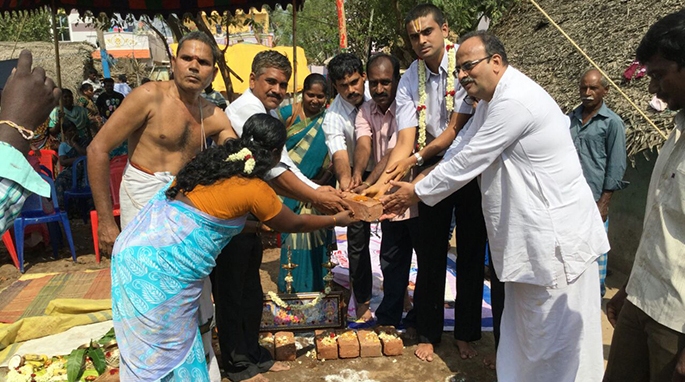 The Bhumi Puja for the reconstruction of 20 homes in Puliyur Village, that were washed out in the floods that devastated Chennai, Thiruvallur, Cuddalore Districts in Dec 2015 was performed on 1st April 2016. The Project PwC Sevalaya Nagar is taken up by Sevalaya and is sponsored by PwC India, a leading professional services firm that delivers quality assurance, tax and advisory services.  The Bhoomi  puja was performed  and foundation stone laid by  Kunj Vaidya, Senior Partner and Lakshminarasimhan, Senior Consultant of PwC.

Sevalaya undertook relief operations extensively immediately after the floods, and thereafter has actively engaged in rehabilitation of the affected people. While responding to relief efforts in Puliyur, Sevalaya found 20 homes inundated, with their side walls and roofs damaged -which left survivors bereft of their belongings and homes.

Sevalaya approached PwC India, to provide support towards the reconstruction of these 20 homes. PwCs generously agreed to come on board with Sevalaya to construct these homes and help the flood affected victims before July 2016.

Post the floods that ravished Chennai and its adjoining districts in December 2015, Sevalaya stepped in and offered its services to those affected by the calamity.

All beneficiaries belong to poor families and work as daily wage earners. Most of the children are students of Sevalaya’s school. The houses, given to them in the 1980’s under Indira Gandhi’s Group House Scheme were in bad condition. Torrential rain and flooding which saw the houses structures weaken and the roofs cave in, added to their woes. Yet, they’ve continued to live under these trying conditions for three months now, waiting for help, as they had nowhere to go.

Driven by PwC, here are some unique details on this project:

This initiative by PwC and Sevalaya is aimed at providing safe and permanent shelters to those affected by the December 2015 floods.