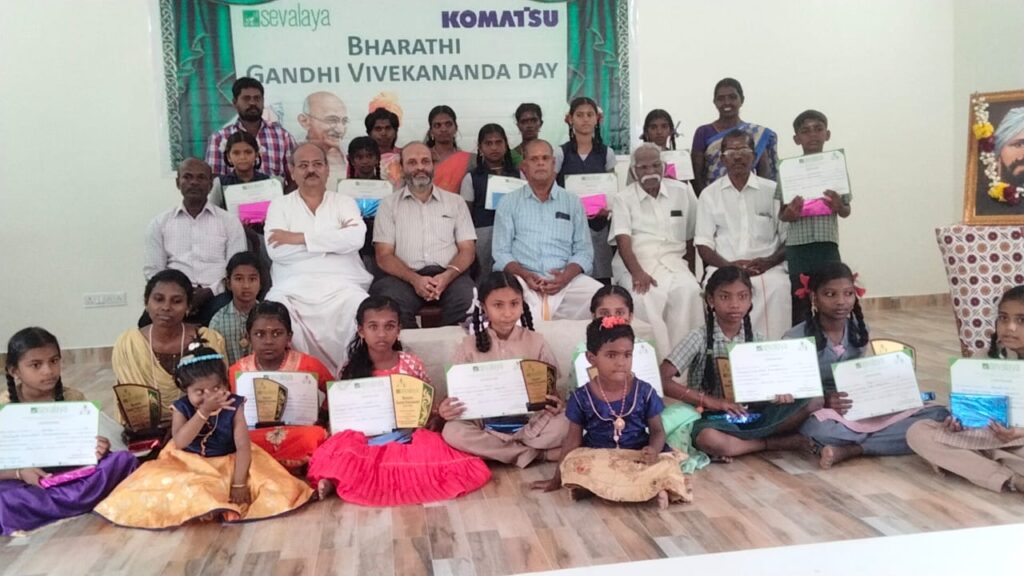 September 11th – a significant day in the lives of the three inspiring leaders of Sevalaya – Mahakavi Bharathiyar , Mahatma Gandhi and Swami Vivekananda is celebrated as BGV Day every year.
S Kailash , Sr Manager HR & GR, Komatsu was the Chief Guest at the BGV Day celebrations a Chellamma Bharathi Learning Centre at Kadayam on September 11th, 2022.

Speaking on the occasion, Kailash said that Komatsu is keen on spending on CSR projects in areas where there is need and does not restrict itself to the location of its operations. He appreciated Sevalaya for creating a monument for Chellamma Bharathi in Kadayam . “ Sevalaya has constructed the building and we (Komatsu) have sponsored the furniture. Now it is the duty of the people of Kadayam to bring life to this building and maintain it as a vibrant learning centre “he observed. He also said that Komatsu is happy to participate with Sevalaya in implementing projects for the welfare of the underprivileged in any part of the State, where there is a need.

Earlier, competitions on topics related to the lives of Bharathi, Gandhi , Vivekananda were conducted for schools in Tamilnadu. 1340 students from 32 schools in 18 districts participated in the competitions conducted.

Prizes and certificates were distributed to the winners from schools in Kadayam, on this occasion.

Sevalaya Murali in his welcome speech spoke about the significance of September 11th. “On September 11th 1921, Bharathi shed his mortal body only to attain immortality through his poems and writings. It was on Sep 11th, 1906 Mahatma Gandhi coined the term Satyagraha for the innovative method of fight against oppressors , in South Africa and it was on September 11th 1893, Swami Vivekananda delivered his historic speech at the World Parliament of Religions at Chicago “ he explained.

The function came to a close with the singing of the National anthem.