An All-rounder in life

Parameswara Venkata Subramaniam ( P V S Manian for short) is an active 80-year old, with an alert mind and a phenomenal memory even for details. If you have the time, listen to his life story unfolding like a screenplay, complete with narration and dialogues, all delivered in impeccable language – both vocabulary and grammar. 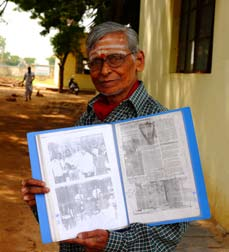 The lone brother to six sisters, Mani remembers being neglected and “muted at home” on T Nagar’s GN Chetty Road. His father had a good job and a car, all of which he lost in a failed hotel venture. Yet he was the law at home and declared Mani “too short for Chemistry lab tables’, and therefore unfit for Maths group. So Mani got 3B ( History and Commerce) at Pachayyapas College , after Principal Prof R Krishnamurthy noticed the 4‘ 8’’ youngster standing alone in the admission queue. Soon the college play ground became Mani’s stage for self expression, through five games including cricket.

Playing 3rd division for Young Gems Cricket Club as an opener and leg break googly bowler, he was “Kulla (short) Venkat’, among three Venkats. He passed his Umpiring exam before passing his Intermediate exam in 1951. Even the money collected from his meager income as a newspaper boy, and what the sale of his text books in Moore Market fetched was not enough to pay the exam fee – so sister’s wedding ring had to be pawned. Mani remembers that the English paper was leaked and a re- examination was held.

Showing correspondence that refers to his name being considered for
Padma Shree, Mani nonchalantly explains how he thwarted it with
the one liner: “Mani is mission-born, not a machine for decoration”.

On landing a job with Indian Railways, Mani left for Gangapur City in the Rajastan desert in 1953, funded by his mother who pawned her chain. There he worked with some brilliant officers, serving them well and earning their praise and goodwill. For young Mani, travelling with the officers in coupes was an ego boosting thrill.

In 1960, Mani won a gallantry award for “working without food and sleep for six days during the first Railway strike“. As Steno Secretary, he had the privilege of accompanying and meeting Prime Ministers. In 1960, Mani rushed to Madras on receiving the news that his mother was not well. It was a false message and a ploy just to get him back to Madras. Mani then joined Simpsons, got married at the age of 38, and lost his only son early.

Mid life, Mani switched his career track and got involved in the cause of the deaf from the mid 1980’s. He was Advisor to the national – and later, Tamil Nadu – Sports Council for the Deaf. During his life in Delhi, he kept lofty company and was involved in organizing sports tournaments and tours. In his long list of proud achievements are his tribute to Don Bradman in the Pioneer and various letters he has drafted for policy change to sponsorship, his speeches and interviews featured on AIR, scripts for documentary films, serving as Hon Editor, South Metro Mail, his skills as a vocalist in Carnatic music… “I suggested the modernization of Cement plants in Tamil Nadu”, he says, searching for documents to support.

Back in Chennai in 2008, Mani joined Ramakrishna Ashram. “I got back the pavement taken over by the Corporation some 40 years back”, he says, explaining that he made his case based on old government records he poured over. “ I got property tax exemption for government-recognised schools in Tamil Nadu”, he says. Showing correspondence that refers to his name being considered for Padma Shree, Mani nonchalantly explains how he thwarted it with the one liner: “Mani is mission-born, not a machine for decoration”.

The secret of his age-defying alertness? “I keep doing things, handle the sick, stay with them in Medical Centre, I clean the toilets, sweep and mop our room”. Mani likes order and his cultured hand writing reflects a methodical mind. Praising the Sevalaya management, he says: “A bed for the abandoned is the greatest gift in the world”.

How did he learn and master multiple fields to become an all-rounder? For once, he does not speak, but answers by touching his ears with both hands. By being a good listener, of course.