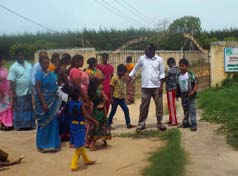 Sevalaya conducts regular health camps in the villages as well as in the school. This has benefitted many people. On 24th July 2014, in association with Udhi Eye Hospital, a camp was organized in Sevalaya’s Mahatma Gandhi Medical Centre.

300 children who were shortlisted from the initial check up conducted by volunteers, Justice Willis and Chambrey Ann were assessed by the doctors from Udhi Eye Hospital and spectacles were provided for the needed children.

SCOPE International also organized camp by Sankara Nethralaya and villagers of Vishuvakkam and Karikalavakkam were the beneficiaries of this camp.

The camp was held on 10th and 18th July 2014, in these villages respectively. Around 200 people were screened and 30 people were referred for cataract surgery. Dental Camp was organized for the children of school. The doctors from Priyadarshini Dental College screened about 300 children.