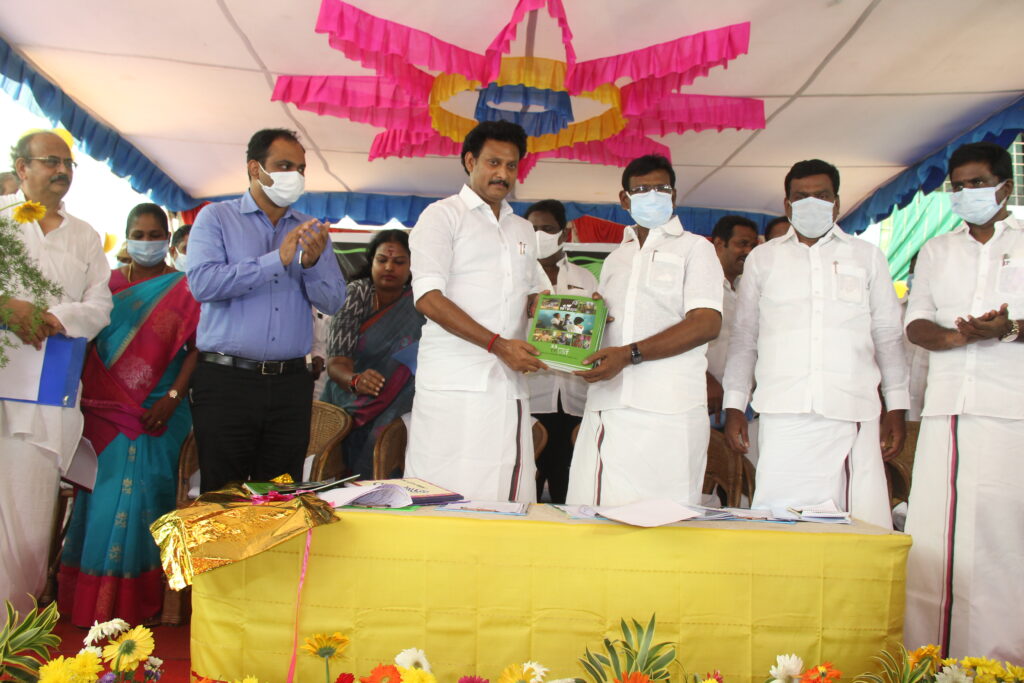 The 33rd Annual Day celebrations of Sevalaya and the inauguration of the New Primary School Building were held on 27 October 2021 at Kasuva Village near Thiruninravur, Tiruvallur District. The School Education Minister, Anbil Mahesh Poyyamozhi was the Chief Guest at these functions.

In his keynote address, the Minister said that the wealth of education is the most superior of all riches.  He said the Tamilnadu government was launching a program called “Home Educational Programme” to reduce student learning gaps, that very evening. He also asked Sevalaya to start more branches and expand its services. He highly praised the Montessori system followed at the school. He advised the students to take their studies seriously and to live with discipline. He also mentioned that proper study alone will guide their lives. He assured Sevalaya that it will always have the support of Government of Tamil Nadu.

Hon’ble Minister of Dairy, Avadi S M  Nasser, Government of Tamil Nadu advised students to use their knowledge and became leaders in their field and he also praised how Sevalaya Muralidharan, like Mahatma Gandhi, is truthful and successfully leading Sevalaya.

Hon’ble Member of the Legislative Assembly, A Krishnasamy , Poonamalle , congratulated Sevalaya appreciated the services of Sevalaya.

Hon’ble Member of the Legislative Assembly, E Parandaman, Egmore said, “Government alone cannot provide all assistance to all. NGOS like Sevalaya should work with the  government.” He said he has seen the growth of Sevalaya since his childhood days. He also wished the organisation success in all future endeavours.

Dr Alby John Varghese, IAS, District Collector, Tiruvallur District, said that good community development can only be achieved if the government and the private sector worked together and he thanked Sevalaya for its’ work in the field of education

Five companies under the CSR scheme and several individuals have provided about ₹ 2 crore to build a new primary school building powered by solar energy which has 12 spacious, well ventilated and furnished classrooms, equipped with smart boards, CCTV cameras, and an RO water facility. The building has the capacity to accommodate 500 more needy children, who will have access to quality education free of cost.

Sevalaya, which provides free quality education to poor students and improves their quality of life, presented to the Minister of Education a document entitled “Kalviyil Sirandha Tamilnadu”. The presentation covered the school’s best practices and successful programs implemented, a document on Montessori education in Tamil and a document on Biomimicry programme in Sevalaya. The  presented to the Minister at the function with the aim of benefiting all educational institutions in Tamil Nadu.

Best Employee Award was given to Prasanna Parthasarathy, VP Donor Relations, and D Vimala, VP Accounts and admin. Gold coins were given to 18 employees who have been working in Sevalaya for 5,10,15,20 years and birthday gifts were given to the employees who are celebrating their birthdays this month.

Cheques were given as prizes to the students who were the toppers in Tamil. The Hon’ble Minister of Education also launched the monthly magazine “Vidiyal” which showcases the artistic talent of the students.

Amarchand Jain, Advisor, Sevalaya, gave the vote of thanks and the function ended with the singing of the national anthem.