BNY Mellon and Sanmar sponsored 2000 flood relief kits worth ₹20 lacs, which were distributed to the people worst affected by the heavy rain in Chennai. Sevalaya is the implementation partner arranging the procurement, packing and transportation of materials and organising the distribution. The houses were flooded and the people were stranded. In the second […]

Children’s Day celebration at Thiruvallur GH by Sevalaya
at 10:30 am - 11:30 am
Category: Celebrations

Sevalaya distributes food packets to gypsies and Irula tribe families Team Sevalaya distributed food packets to 300 people who were shifted from Karanai,  Vayalur and Ammaiappanallur villages near Uthiramerur on the night of 12th November 2021. These people from the gypsy community and irula tribes were shifted from their settlements, which were flooded, to nearby […]

On Nov 10, 2021 Sevalaya staff conducted a survey in Chennai to identify the areas worst affected by the incessant rains. 400 food packets were distributed by Sevalaya staff and volunteers to hut dwellers near Saidapet Coovum bridge, hutment behind Sai baba temple, Mylapore and in the Retteri area in Kolathur. 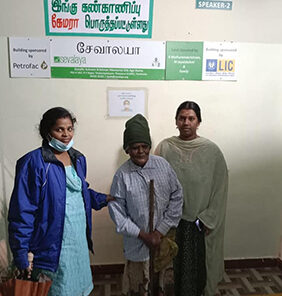 On Nov 10 2021 night, Sevalaya Thanjavur welcomed a new entrant. Sevalaya rescued a grandma who got stranded due to heavy rains in Thanjavur. She is visually challenged and her identity is not known. A nice smile appeared on her face as she changed to warm new clothes. After having dinner, she peacefully slept. Thanks, […] 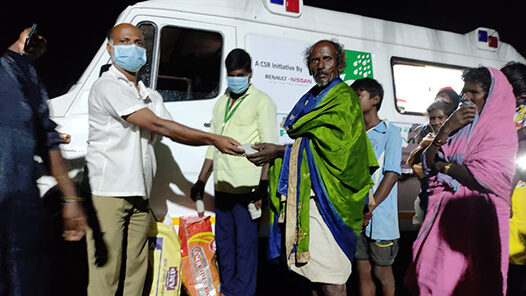 On 8 Nov 2021, Sevalaya distributed food packets (Mixed rice with vegetables) to 150 people of Irula tribe. These people were dwelling in the low lying areas near Utthiramerur. All of them were shifted to nearby Govt schools as part of safety measures following the flood alert issued by Meteorological department. They are daily wagers, […]